The Cabinet in its meeting held here today decided to regularize the services of about 2000 Part Time Water Carriers (PTWC) and Water Carriers-cum-Peon working on daily wage basis in Higher/Elementary Education department as appointed under 1996 policy prior to 27-07-2001, who have rendered 14 years continuous service as PTWC or Water Carrier-cum-Peon on daily wages basis (combined) till the 31st March, 2016 and 30th September, 2016 as well as on same dates.

The meeting was chaired by Chief Minister Virbhadra Singh.

The Cabinet also paid tributes to the martyrs of Uri attack on army base by observing silence for two minutes.

It gave its nod for inclusion of area of Up-Mohal Kyari (Rajhana) in  Shimla into the limits of Municipal Corporation, Shimla.

The Cabinet authorized the MPP and Power department to negotiate with Central Public Sector undertakings in case of Jangi-Thopan (960) MW power project.

·        Approval was accorded to amendment in Rules under “Training & Proficiency in Computer Application & allied Activities” Scheme-2006. 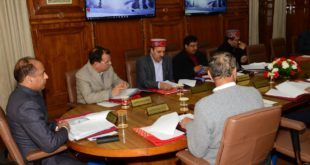